I am a member of the Yahoo Group AQ_NFS. This is a forum for people who take advantage of the links available within Ancestral Quest to the FamilySearch Family Tree. A group member posed an interesting question:

I have a niece with the Given Name of Ruth Smith, she married and then went by Ruth Jones, she then divorced and legally changed her name to Ruth Johnson. My question, from a genealogy standpoint, is she known as Ruth Smith, Ruth Jones, or Ruth Johnson?

Along with others, I gave my opinion, then I changed my mind. I decided to focus on the side issue rather than the actual question. That side issue is: How do I handle a Legal Name Change? By this, I am not referring to the name change which usually takes place because of a marriage. I am thinking specifically about the kind where you go to the court and petition for a legal change of your name.

My concern is that there should be a way in AQ to show an audit trail of the name changes. It is possible to have more than one legal name change. I decided against using Notes because I usually look at notes as an afterthought. I suspect that there are many people who fill in the blanks of the Edit Individual screen but don’t get around to looking at the notes for everyone they import. I decided to create a Legal Name Change event.

Like many of you, I begin tracking an individual by their Birth Name. My Grandfather’s name according to the records was George Albert Beattie McIntyre. 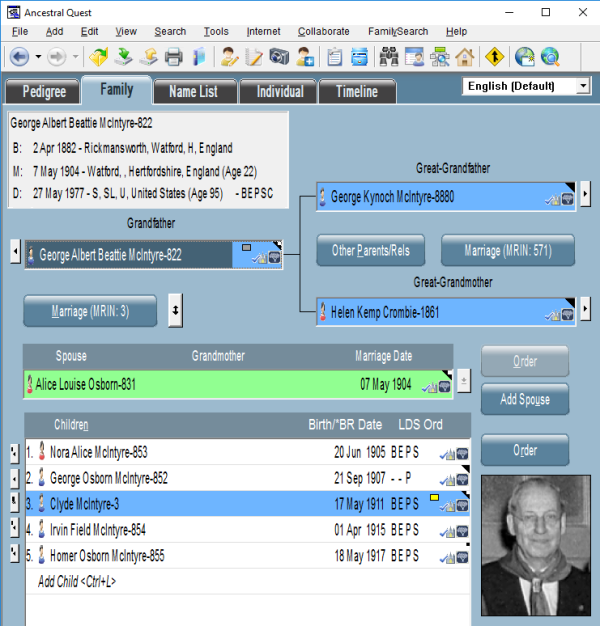 His mother’s maiden name was Crombie, and shortly after his birth, she changed his name to George Albert Beattie Crombie McIntyre. I don’t know if she went through a legal process. Let’s pretend that she did. I want an Other Event for my grandfather which shows where and when his name was changed, and what the changes were.

Oops! AQ will not let me create a new event without giving it the codes it needs in order to know how to form a sentence describing the event. If you would like to add a Legal Name Change event to your file, feel free to copy the code below, and paste it into the large box in the Sentence Usage section. Here is the code I will use:

Copy everything from the first percent sign to the final period. Do not copy the first and last single quote. After you paste it, the Sentence box should look like this:

The Sample sentence shows what will be generated if the Gender, Date, Place and the first Description are filled in. The fields are considered populated if the corresponding radio button or checkbox is checked or clicked. Let’s break down the sentence building code and learn how it works. Let’s start at the very beginning. Our first code is:

If we put only %3 into the sentence box, the output is:

The %3 code places either the word He or She‘ into the sentence, depending upon the gender of this individual. If the gender is Unknown, the %3 code will cause AQ to select the first given name of the individual. In the Sample sentence, the default first given name is always Lynn. If my grandfather’s gender were specified as Unknown, the %3 would place George into the sentence.

Next, we will include some text in the sentence. I will place it in single quotes so that the spaces before and after the text are visible.

Now we will insert the next code

In this code, replace the word Male with the word/words you want to see if the individual is a male. In our case we will use ‘his‘ as the word. For Female ‘her‘ will be our word. For Unknown, ‘the‘ will be the word. What we will actually enter is:

We have switched from a male to a female, so AQ has changed He to She and is using her as the last word. Now I will show the next section of the code. Pay attention to the space. The single quotes make the space visible.

Here ‘ name’ is text to be inserted into the sentence. It is followed by this code:

The code %5 represents Date 1. When there is a < sign between the % and the 5, AQ knows that we are asking whether this individual has a Date 1 value in the Legal Name Change event record. If it does not, it looks ahead and discards everything up to the next > sign. If there is a value in the Date 1 field, AQ follows the instructions immediately after the 5. Those instructions look like this:

It is a space character, so AQ copies the space into the sentence. Next, AQ finds: 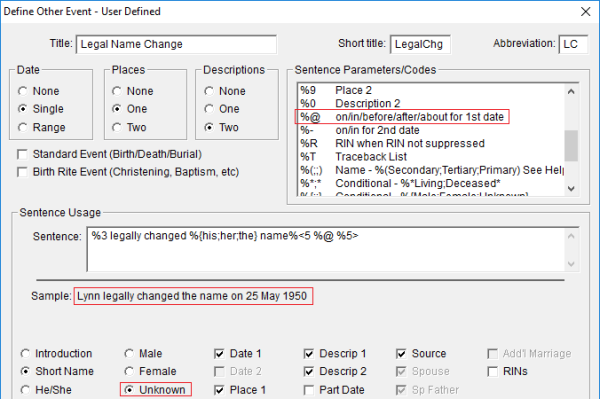 %6 is the code for Place 1. AQ checks to see if there is anything in the Place 1 field. If there is, it first copies ‘ at ‘ into the sentence, then copies the place into the sentence. Note that we indicated that there is no value in the Date 1 field, and the gender is now Male, so the sentence changes as needed.

Here is an example of how the whole thing works. 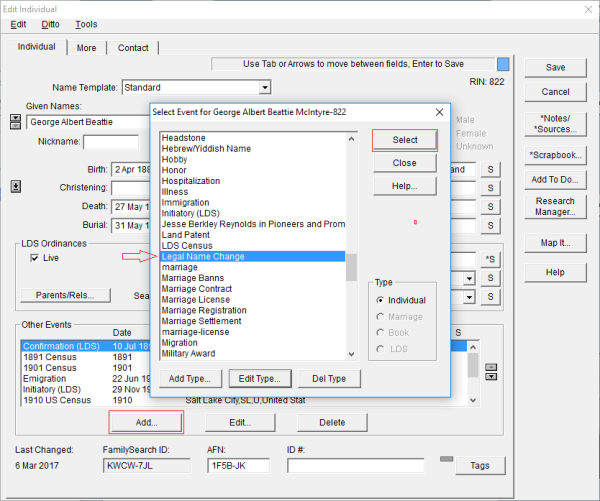 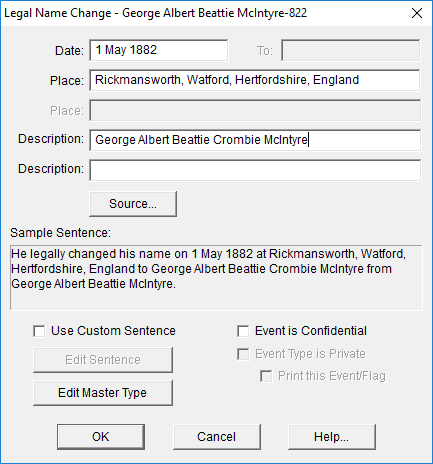 Fill in the date, place and new legal name. Watch the Sample Sentence as it forms. This sentence will go into your documentation.

This begins our audit trail.

When Grandpa went to school, the teacher called roll and referred to him as George ABC McIntyre. The other students began calling him Alphabet. He went home and announced to his mother, “I am no longer a Crombie!”

The second legal name change requires that we place the prior Legal Name in Description 2.

Here is our audit trail.

As he grew older, he always referred to himself as George AB McIntyre. He didn’t actually change his name, but here is how it would have looked if he had. 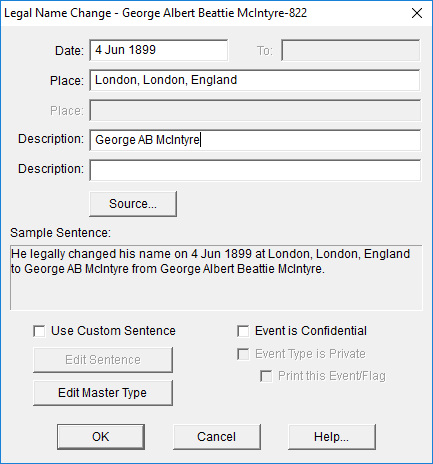 Notice that his second Legal Name was the same as his Birth Name, so it wasn’t necessary to enter the second Description.

And the audit trail is there.

If you actually change the name on the Edit Individual screen after each legal name change, it is never necessary to enter the second Description.

OK, my years as a programmer are catching up with me. I can’t resist making just one more tweak. It will not change the output of the event but it makes the code shorter. Here is the code that you should actually put into the Sentence box:

I read this after it was posted and I discovered that WordPress, my blogging software, looked at the code in the red area above, and decided that I was entering badly formatted HTML code. It removed what it didn’t like, so what you see is not what I wrote. I’m sorry that this can’t be cut and pasted, but this is what I wrote:

This is the code you should use if you plan to make your own Legal Name Change event.

I would like to hear from you! Cancel reply