How to Translate Ancestral Quest Screens

Here we are again. You know how to create a New Language File. Now lets start looking into what the file contains. 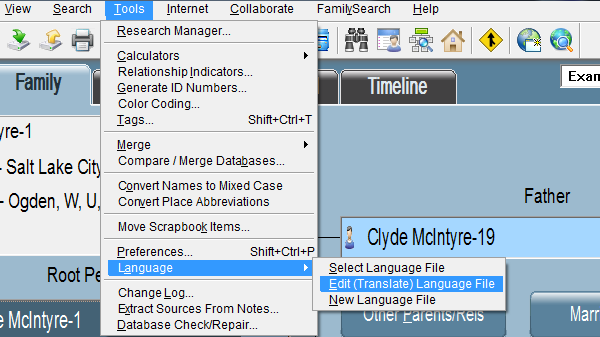 First we open the file we previously created.

To do this, click on Tools > Language > Edit (Translate) Language File.

Having entered the correct Owner ID and Password, the fields below are opened to your use. Change the Date of Last Changes field if you are doing this on a day different from the day when you created or last updated the file. Click the Save button.

This brings up the main translation screen. Notice the small boxes with a plus sign (+) inside. The plus sign indicates that the title to the right describes and contains embedded information which can be revealed by clicking the plus sign. Click the plus sign on the Main Screens line.

Click on the words of the first item, About Ancestral Quest. When you do this, options on the right side of the screen become active. Click on the View Original English button.

The screen that appears is the screen you would see if you were not doing translation, and you clicked on Help > About Ancestral Quest. All of the English words on this screen need to be translated into your language. Sometimes it is convenient to have this screen there so you can refer back to what the English looked like. You can’t actually use this screen to do the translation, so click on the Translate Screen… button.

This screen looks just like the last screen, inside another screen. Position the mouse over the lower left corner and adjust the size until it looks like the image you see here. That way you can see everything on the About Ancestral Quest screen, but you aren’t wasting valuable screen space. 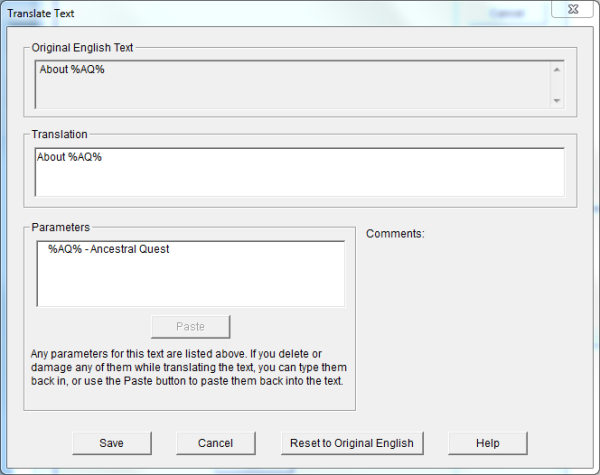 The screen that appears is the Translate Text screen. You will see this OFTEN while translating. Look at the top two boxes. You may have expected to see the text “About Ancestral Quest,” but instead you see “About %AQ%.” The words Ancestral Quest, used in this context, are a registered trade mark. The Parameters box shows that the value of “%AQ%” is “Ancestral Quest.” The author will not allow you to attempt to translate those words. The word “About” however, needs to be translated. 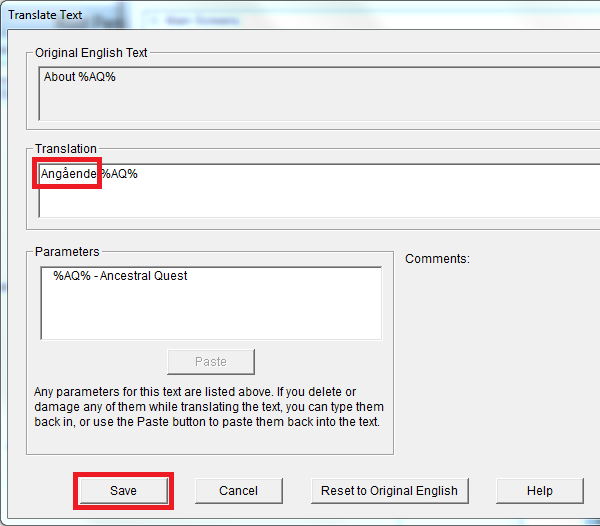 I make my translation, and I click on the Save button.

Well, maybe it isn’t quite that simple. There are things to look out for. 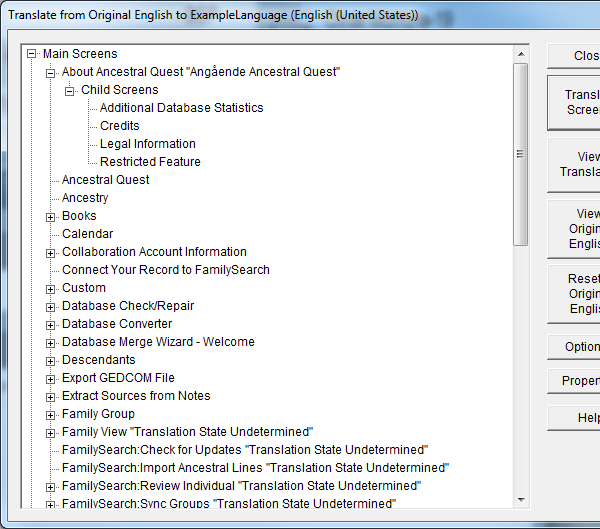 First, EACH and EVERY box with a plus sign must be expanded, and each line needs to be tested to see if it is a translatable screen.

If you highlight the Child Screens line, you will see that this is not the name of a screen, so the Translate Screen… button is grayed out, and the text has reverted to the generic, Translate….

There is another thing you will want to watch out for. Lets look at a special type of screen.

On the right of the screen is a drop-down box. When you click the down-arrow, you see a 1 and a 2. Some screens have more than one version, depending on options chosen. The image above shows screen version 1. After translating it, use the down arrow and click on the 2. 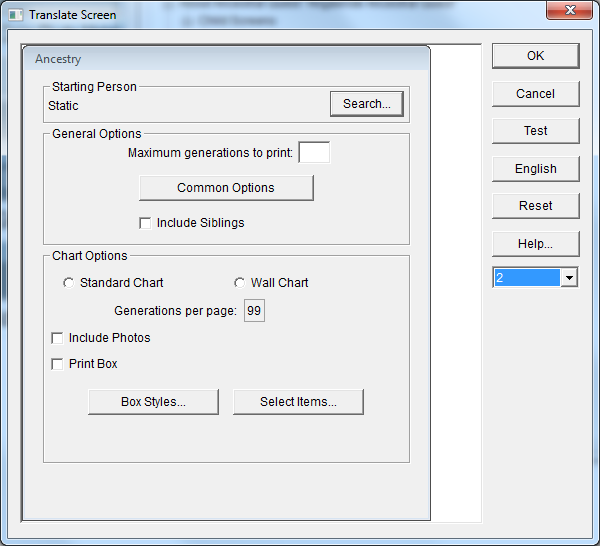 This is version 2 of the same screen. Everything that was not present in the first version will need to be translated in this version. Repeat this process until all versions of the screen (there may be more than two) have been translated.

While we are still on the subject of screens, lets go back and look at one more thing. Ancestral Quest uses the <Alt> key to facilitate jumping to specific fields on the screen. On the Individual screen in English, pressing and holding the <Alt> key and then the B key will move the cursor to the Birth: field. Pressing and holding the <Alt> then the M will show that the individual is a male. Lets look at part of this screen. 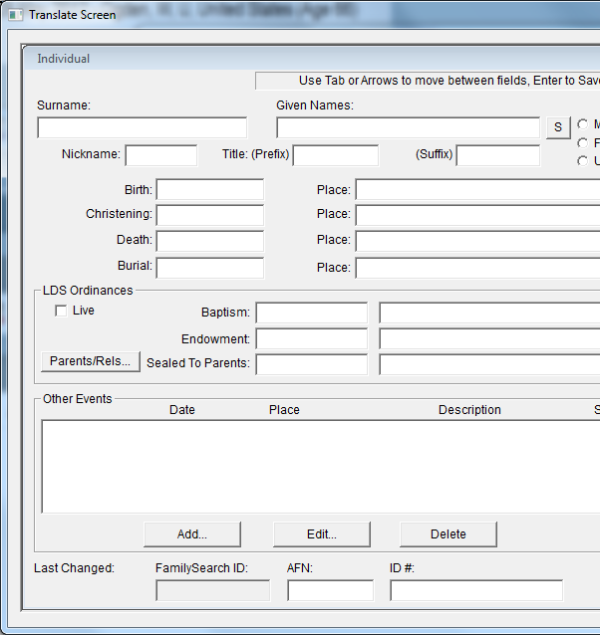 This is how the screen looks when it first comes up. If you now press the <Alt> key this next screen is what you see. 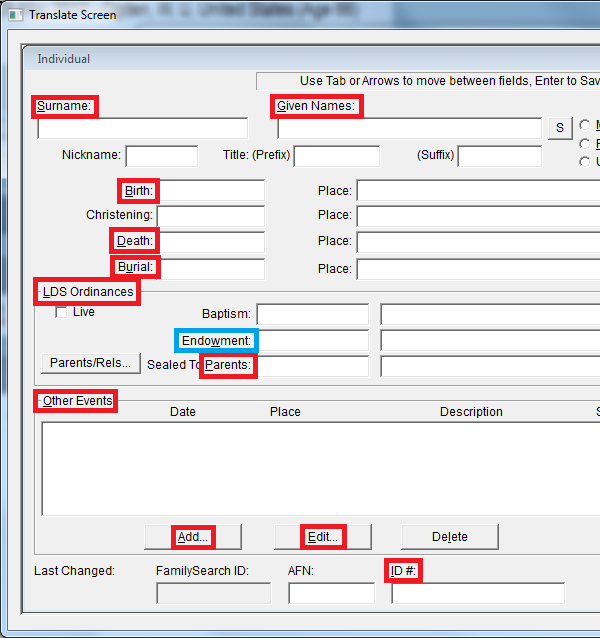 Several of the names have the first letter underlined. Notice that for the word Endowment, it is the W that is underlined. To see how this is accomplished, lets translate that word.

Whether it is the first letter in the word, or some other letter, the & is placed directly before the letter that will be underlined when the <Alt> key is pressed. Any given letter or number can be used only once on a screen as the underlined character. If the R key is underlined twice, Ancestral Quest will not be able to tell which field you want the cursor to move to when you press <Alt>R. When you translate a word, the new word may not contain the letter that is underlined in English. You must choose between selecting some other letter in the word which is not underlined anywhere else on the same screen, or dropping the underline capability for that field.

Suggestions/Questions about AQ Will Do or Subjects discussed here? Leave a Comment.

I would like to hear from you! Cancel reply 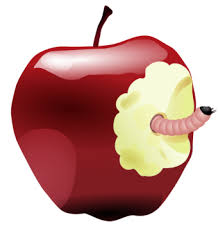